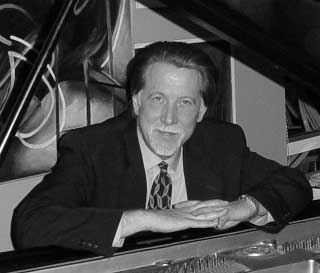 This site is licensed under a
Creative Commons Attribution 2.5 License.

Pianist Jof Lee first began exploring the many mysteries of music as a child in Colorado through the mid 1950's and during the post-bop era of the early 1960's. In the days before academia began taking a legitimate interest in teaching and promoting jazz, he relied greatly on the vast wealth of musical knowledge and life experience imparted by the elder musicians performing at the many jazz clubs in and around the Denver area.

After many years of practice; studies in composition and theory, an association with the Norad Band personnel in Colorado Springs and hundreds of gigs and performances, Jof emerged as one of the more promising young pianists on the local scene. Throughout the 70's he refined his skills playing in a variety of settings; solo piano, trio, quartet, quintet, big band and orchestra.

Two separate encounters with the New York jazz scene in the late 70's found Jof within the musical sphere of jazz tenor giant Stan Getz. It was due to Stans' urging, along with several inspirational performances with the master, that enabled Jof to remain focused and dedicated to the art. After further private studies with pianists Hal Galper, Andy LaVerne and George Cables, Jof began traveling and performing with many world class musicians, appearing in venues throughout Canada, Europe, Japan and the United States.

In the early 80's Jof relocated to the Pacific Northwest where he became the musical director/pianist for Portland jazz vocalist Marianne Mayfield. In the late 80's Jof began a long and fruitful relationship with the legendary bassist Leroy Vinnegar . This association yielded several fine recordings including the NAIRD award winner "Walkin' the Basses" sold on the Contemporary Records label. In addition, he has performed as a sideman on many other provocative projects. He currently works travels with his own trio, or as a soloist, performing both domestically and internationally.

As well as a performing pianist, Jof is also very active as a composer and arranger. His work can be enjoyed in a variety of settings; on recordings, over the internet and on film .